Although Philadelphia Eagles betting has not always been as fruitful as fans would hope, the team has recently proved that they are able to go all the way and win the biggest prize in the National Football League (NFL) – the Vince Lombardi trophy. After decades of struggling and coming up just short, the Eagles won their first-ever Super Bowl title in 2018, in what proved to be a thrilling final filled with surprising moments that US bettors (and the city of Philadelphia) won’t forget any time soon.

If you would like to learn more about betting on the Philadelphia Eagles at top online gambling sites in the United States, make sure to stick around. Below we have a good look at the team’s chances of winning this season, where bookies place and their overall performance history. So, read on and start making better bets on the best Eagles odds at top US online sportsbooks today!

Bet on the Philadelphia Eagles Here

Looking to place a bet on the good, old Birds? Well, have a look at the online sports betting sites list below. Each is sure to have a wide range of wonderful wagering options that feature some very competitive odds!

What You’ll Find In Our Philadelphia Eagles Guide

Despite failing to follow-up their Super Bowl winning season, with another successful campaign, NFL sportsbooks have pegged the Eagles to do well this season for a number of reasons. Firstly, although the team didn’t even make it to the NFC Championship, they were at the very least able to make it to playoffs, and pick up a win before being knocked out.

Secondly, the Eagles offensive line seems to be filled with experienced players that are fully capable of getting the job done. The offensive line and running back positions both have quality players vying for the position of starter, and quarterback Carson Wentz has shown some good form in recent weeks. Wentz is also adamant of becoming the quarterback to actually win the Super Bowl for the team (as he was injured during the 2018 winning season.)

Finally, if the recent form of the both the Washington Redskins and New York Giants continues, the odds of the Eagles winning the NFC East are pretty good. There only real test will be the Cowboys, and at the moment, it remains to be seen how team form will transpire in Dallas.

Overall, we wouldn’t fault anyone who would like to place a future bet on the Eagles. They are one of the stronger NFC sides, and probably have one of the best chances of winning the Super Bowl from the conference. We would recommend waiting a bit to perhaps see whether the team’s paper form will turn into real results, but that’s just us.

Check out our NFC East Guides

Founded in 1933, the Philadelphia Eagles replaced the bankrupt Frankford Yellow Jackets. The Eagles franchise rights were given to Bert Bell and Lud Wray after the NFL allowed an expansion. The team struggled during their early seasons in the league, but this changed during the 1940s where not only did the team’s performance pick up, but the support for it too.

The good form in the 1940s culminated in NFL Championship victories in 1948 and 1949, following a failed attempt to win the final in 1947. The team would return to struggling after their 1949 Championship win, and would not really do anything of note throughout the decade. This would change around 1959, where the team would start showing real promise again, and ultimately resulted in a 1960 Championship win.

Following this period, the team would struggle yet again to post any inspiring performances in the league until almost a decade after the NFL-AFL merger. In the 1980 season, they won their first NFC Championship title in the modern era, but failed to translate that into a Super Bowl victory. Following this performance, the team entered a bit of weird era that would last for about two decades, and would see the team make it to the playoffs a handful of times.

The team’s real period of prominence really began after Andy Reid was hired as coach in 1999. Reid was able to lead the Eagles to four consecutive NFC Championship games between 2001 and 2004 (three of which ended in losses), which eventually culminated in a Super Bowl loss to the New England Patriots in the 2004 season.

Although Reid led the team some of the best results they had in years, he failed to lead the team to their first Super Bowl win, and was fired in 2012 after the team failed to make it to the playoffs for two consecutive seasons. Reid was replaced by Chip Kelly for two seasons, and Kelly failed to replicate the team’s previous success, which would also lead to his dismissal in 2015.

Doug Pederson would step in to take charge of the team in 2016, and he would eventually lead the team to the success Philadelphia natives had been waiting for years during the 2017 season, where the Eagles would beat the New England Patriots in the Super Bowl. Many fans are hoping that this may be a new era of success for the team, and some sportsbooks believe that it might just be. 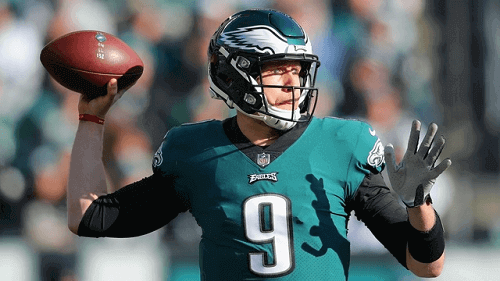 Before you go all in on a bet on some Eagles odds you found at one of our top NFL sportsbooks, make sure to have a look at these team facts and statistics: