Tennessee Titans betting has not exactly been all that profitable in the United States recent years. Since making it to the Super Bowl in 1999, the National Football League (NFL) team has struggled to stay on top, sporadically making it to the playoffs and even then coming short every single time. Their struggles are definitely partly due to the fact that they currently compete in the AFC South which was mostly dominated by the Indianapolis Colts at the start if its existence, and has more recently seen the Houston Texans attempt to take up the mantle.

If you would like to bet on the Tennessee Titans, make sure to keep on reading down below where we have a good look at the team’s recent performances in our guide. Some of the areas we focus on exploring with this NFL team include their odds to win the Super Bowl, their overall history and then finally some interesting facts to keep in mind when making bets. So, read on and find out more about betting on the good, old Titans at US online gambling sites now!

Bet on the Tennessee Titans Here

If you are looking for the best odds on the next Tennessee Titans game, make sure to have a good look at any of the sports betting sites listed down below. They have loads of great offers available for US bettors and more.

What You’ll Find In Our Tennessee Titans Guide

The Tennessee Titans experienced a rather average 2018 season, going 9-7 throughout the regular season, but failing to make it the playoffs. The team started the season with high expectations which were dashed as the season went on and they suffered more losses and quarterback Marcus Mariota got injured.

Bookies aren’t really putting any high hopes on the Tennessee Titans with the team sitting in the latter half of potential options. Following last season’s performance, we wouldn’t say that reaching the playoffs is out of the question, but winning the Super Bowl may be a huge gamble.

Overall, if you support the Tennessee Titans, by all means place a fun future bet on the NFL team. However, if you want to make a bet that may actually payout at the end of the season, we urge players to have a look at other options. 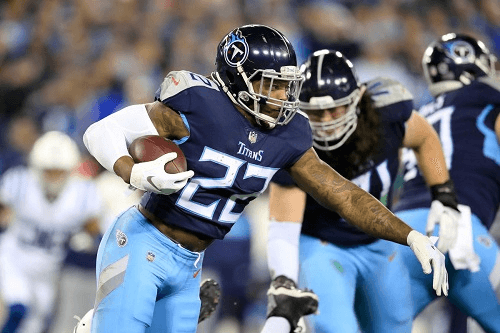 Originally known as the Houston Oilers, the Tennessee Titans were founded in 1960 and as an American Football League charter team. The team would go on to win the first two AFL Championship games ever held.

When they NFL and AFL merged, they were first assigned to the American Football Conference’s Central division. The team struggled to remain competitive and would only really begin regaining form in 1974, which then culminated in a few playoff appearances in the later 1970s.

The early 1980s also proved to be rather tough for the Titans/Oilers but this would change towards the end of the decade where they made the playoffs each season from 1987-1993. For much of the mid-90s, the team returned to a period of poor performances which would last until the team changed their name in 1999.

The 1999 season proved to be the Titans best ever as it culminated in the team’s only ever Super Bowl appearance, which unfortunately resulted in a loss. Since then, the Titans have seen very limited success, with the highlights including a handful of playoff appearances and an AFC Championship game loss. Fans are still holding out hope that the team will one day lift the Super Bowl trophy.

If you plan on placing a bet on the Tennessee Titans this year, you should have a good look at some of the listed facts down below to make better bets: