Burrow, who is an Ohio native, seems eager to get started at his new team, responding to his selection with the tweet, “Enough talk. Time to get to work”. The positivity may come as a surprise to some who thought that Burrow may have opted to pull an “Eli Manning” in the Bengals. (Manning famously dumped the San Diego Chargers for the New York Giants on draft day.) 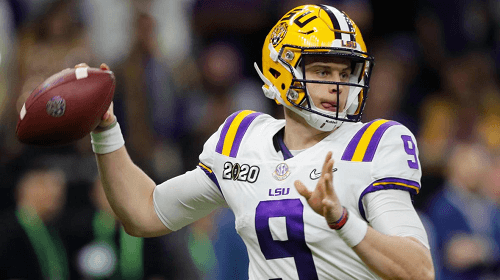 Can Burrow Turn the Bengals Around?

One constant in the NFL for the last thirty-odd years has been the Cincinnati Bengals poor performances in the league. The Bengals, who have not won a playoff game since before Burrow was born, are coming off a poor 2019 season, which saw them go 2-14.

Andy Dalton, who was the Bengal’s starting quarterback for most of the season, performed pretty dismally, posting a record of 16-14 throughout the entire season. Dalton will seemingly have to fight for his position as starter that is if he is not released before the season begins.

The Bengals clearly have big hopes for Burrow as it is estimated that his rookie contract will be worth more than $36.2 million, with $6.6 million being guaranteed in his first year. If Burrow’s college stats are anything to go by, this big payday may be warranted.

Four Quarterbacks Drafted in First Round

Burrow was one of four quarterbacks to be selected in the first round. Other big names chosen in the first round included Tua Tagovailoa who was selected fifth by the Miami Dolphins. Reception on Tagovailoa has been a bit mixed. He seems to have strong talent, but he missed his junior year due to injury. Like the Bengals, the Dolphins will be hoping that a new quarterback will be able to turn their story around.

Former Oregon quarterback Justin Herbert was selected sixth by the Los Angeles Chargers. The Chargers, who recently parted ways with long-time quarterback Philip Rivers, will be hoping that Herbert will be the final piece of the team’s puzzle. It will be interesting to see whether the Chargers reach new heights in the 2020 season.

Finally, the last quarterback selected in the first round was Jordan Love, who was selected 26th by the Green Bay Packers. Although 36-year-old Aaron Rodgers is coming off a solid season, it appears that the Packers are looking for his replacement. There may be a battle for starting position this season.

The 2020 NFL Draft continues this weekend. For more updates on the NFL and NFL betting, make sure to keep it locked here at Gambling360.com