Chicago Blackhawks odds have seen a huge decline in recent years. Since the team’s Stanley Cup victory in 2015, they have not made it past the first round of the playoffs, in addition to at times not making to the playoffs at all. This trend seems set to continue this year, with the team currently being one of the worst performers in the Western Conference, which is not at all pleasing the Blackhawks massive fan base.

If you would like to learn more about betting on the Chicago Blackhawks at the best online gambling sites for US bettors, make sure to read on down below. In our guide dedicated to this Original Six team, we take a look at the Blackhawks odds to make the playoffs and Stanley Cup as well as their overall performance history. We also provide bettors with a list of the best betting sites to place wagers on the NHL. So, read on and begin making wagers on the Blackhawks today!

If you want to place a bet on the good, old Chicago Blackhawks, these are the sport betting sites to do it at. They’ll provide you with the best odds available online:

Chicago Blackhawks odds to make the playoffs are not very high this year thus it is not all that surprising that their odds to win the NHL Stanley Cup are even lower. The Blackhawks really have not been in form in 2019, frequently occupying the bottom position on the Western Conference standings.

With the team really struggling to keep up this year, we would really not recommend placing a bet on the team to make the playoffs. While turnarounds can happen, with it almost being the halfway point of the season, we do not believe that they are capable of turning this story around. 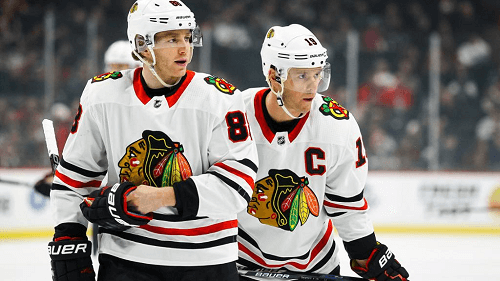 The Chicago Blackhawks are consistently considered to be one of the best Western Conference teams in the NHL. With the team having garnered three Stanley Cup wins in the last decade, it really isn’t that hard not to agree with the statement on some level. That stated, the team has traded many of the players that were core members of the cup winning squad, including Niklas Hjalmarsson and Marian Hossa and have struggled since.

Over the last two years, the Blackhawks have failed to make the playoffs and it seems that it will be going that way once again. Due to the ongoing poor performance of the team, Joel Quenneville (who has won three Stanley Cups with the Blackhawks) was fired and replaced by youngster Jeremy Colliton. At this point, Colliton seems to be performing worse than Quenneville but who knows? Perhaps, the team will improve swiftly in the years to come. Or, maybe Justin Bieber really has sentenced the team to eternal damnation for time to come.

Before placing any bets on the Chicago Blackhawks, you may want have a good look at some of these stats and facts: