Carolina Hurricanes odds have never really been all that good. The team has pretty much struggled since its inception, and has only seen real wins sporadically, even when they competed as the New England/Hartford Whalers. The one thing to be noted in their sordid history is that when they do make the playoffs, they often play very well. In their six appearances in the playoffs since moving to North Carolina, they have made it to the Conference Finals on four occasions. Thus, they are a team to look at if they are on a good run.

If you are interested in betting on the Carolina Hurricanes, make sure to stick around. We go through all you need to know about betting on the team below. This includes their odds to win the Stanley Cup, their overall performance history in Carolina and even list the best online gambling sites so as to bet on the team whenever you feel like. So, what are you waiting for?

The Carolina Hurricanes are not performing as well as they did last season but they still have a good chance of making the NHL playoffs. The one thing to take note of is that they aren’t really a team that sees success all that often but if they are able to make it to the playoffs they generally tend to perform well.

With their position in the league looking as shaky as it is, we’d recommend waiting to see whether or not they make the playoffs before placing a bet on the team at the best online sports betting sites. We then suggest that bettor remain cautious with future. We suggest betting on them to make it through single rounds rather than betting on the team to win the Cup overall.

The Carolina Hurricanes started off in the NHL as the New England Whalers when they were first formed in 1971. When the team moved to North Carolina in 1997, they were rebranded as the Carolina Hurricanes. During the 40 plus years that the side has been part of the NHL’s Eastern Conference, it has only seen one Stanley Cup victory, two Conference Championship titles and three Division Championship titles.

Since their 2006 Stanley Cup victory, the Hurricanes haven’t really been considered as a real contender for the title. In fact, the team actually went through an eight-year slump in which they consistently failed to make it to the playoffs. In 2018, a new general manager in the form of Don Waddell was hired, which ‘Canes fans are hoping will help the team get out of its ongoing post-championship slump.

Bettors will find that as a result of the Carolina Hurricanes’ terrible performance over the last decade, the team has not really been given good odds to win anything in recent years. Basically, we’re saying that if you should decide to place a future bet on the ‘Canes and they land up winning the Stanley Cup, you’re going to be in for a handsome payday.

Following the team’s appearance in the Conference finals in 2019, their odds of winning have increased a fair amount. However, they’re still not really considered favorites. 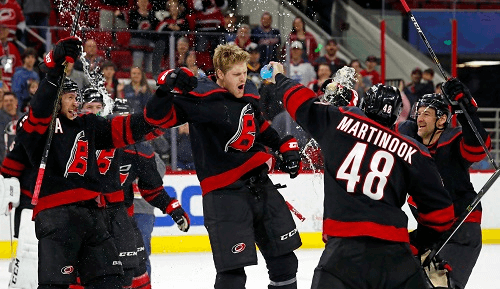 Before placing a bet on the Carolina Hurricanes, here are some key facts about the team since they moved to keep in mind: