Vegas Golden Knights odds have proven to be pretty kind to some lucky US bettors. Gamblers who decided to risk it on the new National Hockey League (NHL) team to win the Western Conference Championship in their inaugural season were well rewarded. Although the team has a short history, it seems clear that they are on the path to winning a Stanley Cup soon, or at the very least, giving it another good attempt. With the team’s good performances and the favorable odds behind them, they have become a favorite with US bettors.

If you would like to find out more about betting on the Vegas Golden Knights, make sure to carry on reading down below. We have created a guide to betting on the team that features helpful information on their odds to win the Stanley Cup, their overall performance history as well as some interesting performance facts. We also list the best online gambling sites for placing hockey bets so you can start winning money today!

The Vegas Golden Knights has really shaken up the Pacific Division since joining in the NHL in 2017. The team has made it to the playoffs every season since joining (bear in mind that this means twice thus far), and already have a Stanley Cup appearance behind their name. As this season’s halfway mark draws nearer, it seems that the Golden Knights will be competing in the playoffs for their third straight season.

Does this mean that they have what it takes to actually go the distance this time? Well, this is a hard question to answer. While Vegas does have a talented squad, they are quite prone to dropping games that they should win on paper. They also seem to have more of an even match record than one represents a winning team.

We would really like the team to win and get their Cinderella story (even if it is two years late) but we have to caution US bettors from making this bet too soon. We’d recommend waiting to see how the team performs throughout the rest of the regular season before placing a bet a Stanley Cup future on them.

It is well known that Las Vegas has wanted a sports team of their own for some time. Sin City’s dream finally came true in 2016 when the NHL approved the city’s expansion bid, making the Vegas Golden Knights the first professional sports team to ever be based in the Las Vegas metropolitan area. (The National Football League’s Oakland Raiders are expected to join the team in 2020.)

So far, the team has only completed one full season (2017-18) in the NHL’s Western Conference, and what a season it was! Surprisingly, the team started off the season very well, winning eight of their first nine games. The rest of the season would prove to be quite fruitful, with the team breaking loads of expansion team records.

The season would ultimately culminate in the Golden Knights making it all the way to the 2018 Stanley Cup Final. Unfortunately, the team’s (and many sports bettors) dreams came to an end when the Washington Capitals took the final series 4-1 despite the Knights winning the first game.

Although the following season was not as fruitful as the first, the Golden Knights at least made it back to the playoffs. Unfortunately, they were defeated 4-3 in the First Round by the San Jose Sharks.

The Golden Knights have proven to be a strong side. They don’t seem like they’re going to slow down any time soon. We wouldn’t blame anyone who felt the need to place a bet on this great side. Just know that you don’t have to head to Vegas to do so! With all the great sports betting sites available here, you can do so anywhere in America! 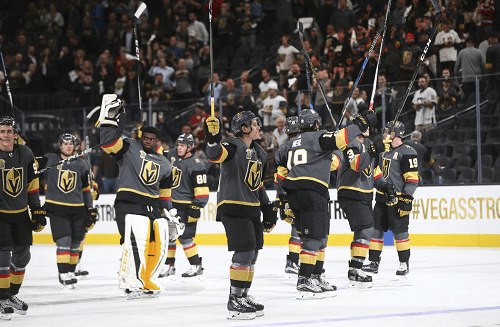 Before betting on the Vegas Golden Knights make sure to have a good look at some of the performance stats and facts listed below: