It’s the Anaheim Ducks at Carolina Hurricanes interconference clash tonight. The Ducks come off a great bounce back dumping the Predators 4-2 on Thursday night. Anaheim was defeated 4-1 in their matchup with the St. Louis Blues Monday night, this before making their way to Nashville.

On the other side of the coin, the Hurricanes were on the road playing Columbus Blue Jackets on Thursday night, losing by a score of 2-3. The team also lost their previous contest to the Washington Capitals with a 2-0 score. Will they come out victorious on today’s matchup? Here’s what we think. 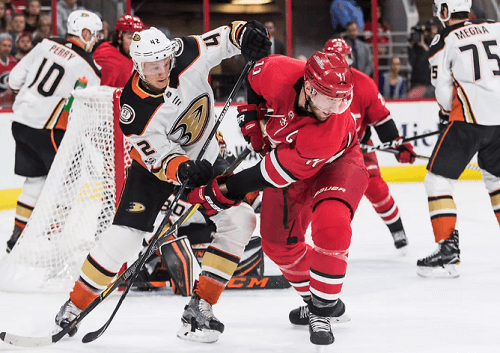 The Anaheim Ducks were on action on Thursday night trying to bounce back from their four straight losses and getting blanked seven times in their last eight games. The team is currently 18 points behind the Coyotes in the Pacific Division and 15 points behind the Jets for the second wild-card game. The team is sitting 22nd in the league with a recorded goals against average of  3.17 goals per game. The Ducks have managed to convert 14.6 percent of their chances with man advantage in power play, they are tied for 29th. The team is now 17-24-5 on the season with veteran center Ryan Getzlaf still dominating as the most productive player in the team with 30 points.

The Hurricanes were also looking to get back on track in their matchup with the Blue Jackets, but they unfortunately lost by one goal. Carolina is currently 27-17-2 on the season and 4th place in the Metropolitan Division. They hold the top wild-card spot and are 12th in the league in goals for, averaging 3.22 goals per game on the year. The team is tied 7th in goals against, allowing an average 2.72 per game. The Hurricanes managed to convert 22.1 percent in power play and they are tied for 8th place.

For tonight’s matchup, we have to go with the Carolina Hurricanes. The Ducks have performed very poorly in most of their recent matchups. The Hurricanes on the other hand are pretty determined. In their last five games, the Ducks lost four in a row while the Hurricanes are 4-2.

Get the Best Odds Here: