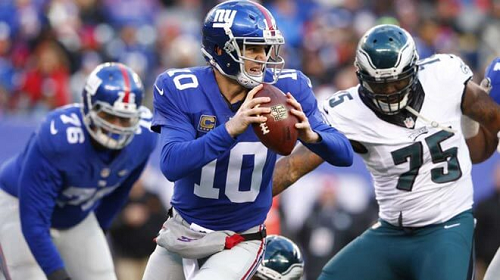 The New York Giants v Philadelphia Eagles matchup on Monday night at the Lincoln Financial Field in Philly is set to be an exciting one for USA sports bettors. This is the first meeting this year for these two NFC East Division teams. In the previous two meetings last year, the Eagles took the victory each time. The PA Eagles have also won their previous five meetings in this series.

The New York Giants have not had a fantastic season, as was expected by many. When they made the change from Eli Manning to Daniel Jones, this gave them a slight advantage. Regardless of the change Daniel Jones has a tough time because the NY Giants have lost eight consecutive games this season. The New York Giants go into this game having lost heavily to the Packers. The final score was 31-13. This losing streak has many wondering whether the Giants will be able to bounce back and dash the Eagle’s hopes of making the playoffs.

You can see from the previous wins that the Eagles are prepared for the New York Giants v Philadelphia Eagles matchup this Monday. Their five previous wins have shown them as a force to be reckoned to win the NFC East Division. However, they had had a few setbacks like the serious blow they were dealt when they lost to the Miami Dolphins while on the road. Don’t count the Eagles out of the playoff race, though. They still have a fighting chance.

This past Sunday, the Eagles did not perform at their optimal best, and many have described their performance as choking. But if you have placed a future bet on Philly making the playoffs, you should not worry too much because they are one game behind Dallas, and there are still four more games to go. This includes a home game against Dallas. You can only hope that the Eagles will be able to keep the playoff hope flame burning bright with a win over the Giants this Monday.

When you look at the team stats, it may seem as if the Eagles have the edge over the Giants. When we are honest, the NY Giants are not having a grand time this season, while the Eagles are pushing hard. Below you will find betting odds from various sportsbooks in the United States.