Before the 2019 NFL season started, undeniably, most football fans thought the Cleveland Browns were the team to watch. Many assumed that now that Baker Mayfield has got some talented support in the form of Odell Beckham Jr. and Taywan Taylor, the Browns would become an offensive force to be reckoned with. But, three games into the season, and the Browns have posted a record of 1-2, with Mayfield seeming to be crumbling under the pressure.

Despite very noticeable problems with their offensive line not understanding the word “discipline” (in their match against the Tennessee Titans, the Browns gave up 182 yards just in fouls), there are some pundits that believe that Mayfield is the root of most of the Browns’ current offensive issues. Currently this season, he has thrown three touchdowns against three interceptions and a total of 610 yards. This has given him a rating of 73.4 so far this season, which really is very underwhelming by modern standards.

With many pondering the question of what exactly is going wrong with the Browns, many have begun to ask the question of whether it may be Mayfield’s inability to deliver in high pressure situations that is getting the team down.

Can Baker Mayfield Deal with the Pressure?

There is no question that Baker Mayfield is not really putting up the performances that NFL fans expected of him this season. In some situations, it has been very clear that he was the cause of a failed play. There have been times in which Mayfield has thrown the ball prematurely out of fear of being rushed or completely ignored open receivers.

However, to say that the struggles the Cleveland Browns have faced in their last three games rest squarely on the shoulders of Baker Mayfield would be unfair. As previously mentioned, the Browns offensive line have been terrible in recent weeks, basically, allowing defensive linemen the opportunity to rush at Mayfield, and at times force bad plays. 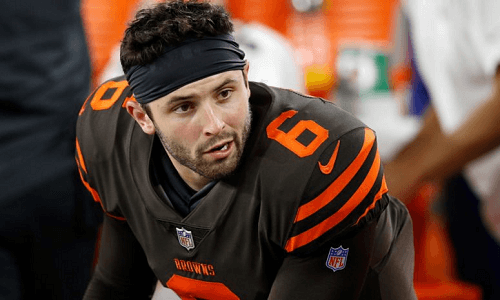 In such situations, it is not the fault of Mayfield that the offense is struggling to make any ground, but rather the person in charge of calling the plays. In this case, that would be Freddie Kitchens who has been making some pretty questionable decisions since being put on the hot seat, including refusing to run the ball in some key situations where it was clear that a pass may not be the best way to progress.

The signs that Mayfield is looking to breakout and deliver for the Browns are there. The quarterback landed an 89-yard touchdown via Beckham against the Jets in Week 2. However, it is the inconsistency that is killing the team’s chances of not only making it to the playoffs for the first time in 17 years.

There is still time for the Browns to get back in the game – after all, this loss could be the second of a 14-2 regular season record. Although we aren’t that hopeful, it is pretty clear that some changes in thought and approach need to be made for this team to reach its full potential. While that blanket statement includes Baker Mayfield, it also includes head coach Freddie Kitchens and the Browns’ offensive coaching staff and players as a whole.