The NBA says black lives matter, in a stance expressed by both the women’s and the men’s league. The National basketball association announced its return to the game last Friday. After almost three months of hiatus due to the worldwide pandemic caused coronavirus. The NBA players represented by Kyrie Irvin released a statement regarding their imminent return. They were raising concerns about the nationwide protests incited by the murder of George Floyd. Thousands of Americans took to the streets after the video of African American Mr Floyd was killed by police brutality. Meanwhile, organizations publicly declare their allegiance to black lives matter movement.

In the graphic video, the deceased can be seen complaining about a blocked airway. The deceased says, “I can’t breathe” several times and is blatantly ignored by the police who are now charged with his murder. This video going viral is all around the world is the wake-up call that opened up the conversation of racial injustices in American systems. As a result, every major corporation is taking a stance on Black Lives Matter as an act of solidarity. The NBA says black lives matter and that the organization must issue an official statement on the matter. 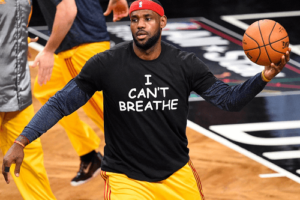 The NBA league is set to resume on the 7th of July, and all players are required to quarantine until they test negative for the disease two times. Then, training will begin after each player has passed this quarantine process. Players have expressed their only condition is the stance associations position regarding black lives matter.

Everyone in the Disney bubble, including players and personnel, will be tested for the virus daily. Group activity will only happen after this system has been in place for weeks. This may seem excessive, but this disease is highly infectious. And basketball, being a contact sport, makes it more susceptible than any other environment.

Of course, because of this reason, many players are not returning to the season out of health concerns.   Many players with underlying health conditions are high-risk individuals and cannot afford to catch the disease.

The Odds for the NBA Title

While 11 teams head to Orlando for the NBA title, the odds towards the title is between three teams. The Milwaukee, the Lakers, and the Los Angeles Clippers are all leading with competitive points and are the likeliest contenders for the title.

Disney is in Florida, the state that opened its gates a tad too early and has overtaken higher density areas.  This means Florida is now the epicentre of the virus. Therefore the basketball players returning to the league have to be extra prudent for their safety.

For the latest news, check out our recent posts.